Posted at 21:03h in Uncategorized by John Hayt
16 Likes

If you’re looking to make your home a little more energy-efficient and green-friendly without covering your roof with expensive solar panels, Jacob Vargo has a suggestion.

A solar-powered attic fan “is a great investment,” Vargo said. “If you can keep that area above your living space cooler, it’s going to save you money on your air conditioner running and it prolongs roof life as well.”

Vargo, the owner of Solar Reflections Inc. in Chalfont, Bucks County, was one of nearly 200 vendors displaying their goods and services over the weekend at the annual Spring Eastern Pennsylvania Home Show in Allentown.

The Agri-Plex at the Allentown Fairgrounds was filled with vendor displays for companies that could do everything from paving, excavating and roof replacement to remodeling your kitchen or bathroom.

There were vendors hawking everything from hot tubs and lawn furniture to home security systems and closet organizers.

Cookware and cutlery were among the more popular displays, as at least two vendors performed cooking displays for dozens of passersby. 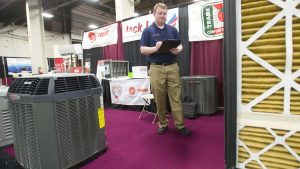 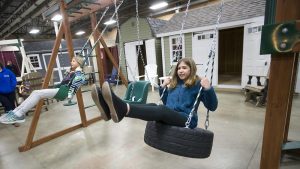 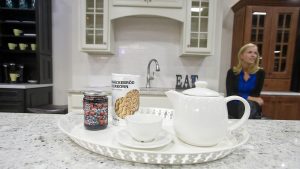 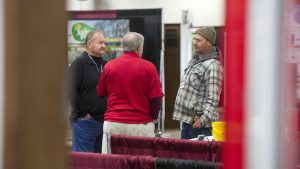 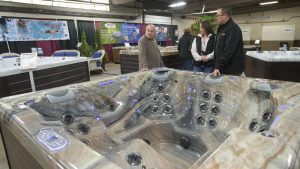 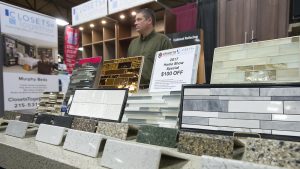 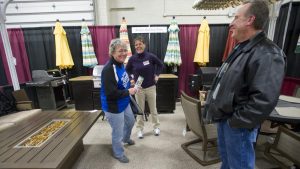 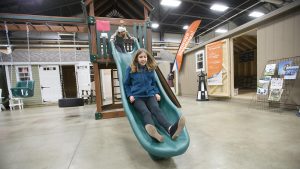 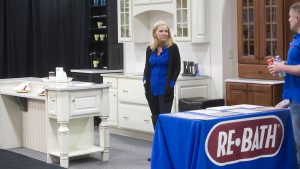 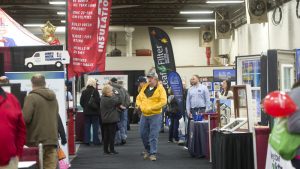 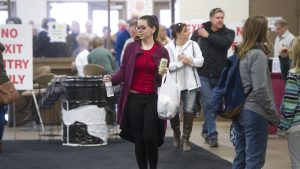 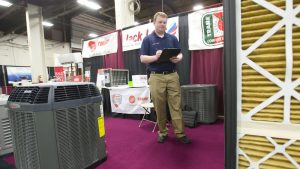 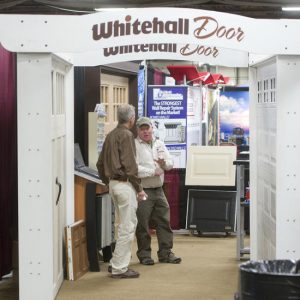 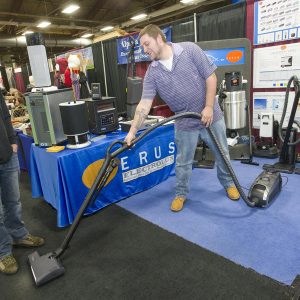 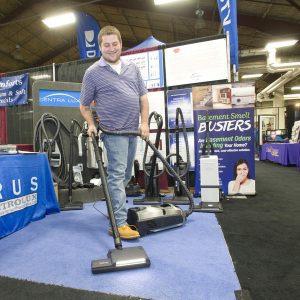 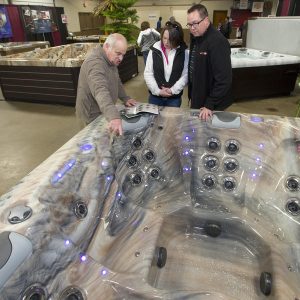 At the ScaleDown Cookware booth, a paper with an alarming headline was on display with rows of German-made titanium cookware: “Is your cookware killing you?”

Indeed, cookware vendors were trying to draw in customers with a promise that their wares offer health benefits, not the least of which are the absence of chemical coatings, such as Teflon, or metals, such as aluminum, copper and iron, which can leach into food cooking at high temperatures.

At the Kitchen Craft booth, chef Mike Kelch prepared chicken, potatoes and a vegetable medley, which he distributed after just 15 minutes of cooking time from freezer to plate.

The seven-ply metal used to make the cookware in Wisconsin is coated in surgical steel to prevent leaching, he said.

The nonstick coating and vapor seal cover allows one to cook without oil or water, which is healthier, he added.

Charmagne Harris, organizer of the home show for Jenks Productions, said products and services related to renewable energy and energy efficiency and are trending items among homeowners.

“It has been and it will continue to be,” said Matt Baker, vice president of Acoustical Spray Insulators Inc. of Allentown. “The cost of energy is not going to go down anytime soon.”

Aaron Baker, Matt’s son and an estimator for the company, said most homeowners do not even bother to replace their fiberglass insulation every 15 years, which is the recommended industry standard.

“We’re two to three times more expensive than fiberglass in a new home,” Matt Baker said. “But the payback is in five to seven years. That’s in real dollars.”

Adam Cuvakovic, who represented Solar City at the show, said his prospective customers were interested in both cost-savings and an opportunity to help the environment by installing solar panels at their homes. Many, he said, are pleasantly surprised by what he can tell them about costs.

“A lot of them think that solar is unattainable and unaffordable and I get to tell them that, actually, it’s very affordable and there’s usually no up-front costs involved in it,” he said. “If a roof qualifies, we can help homeowners convert over to solar electric with no out of pocket costs.”

There is no need to buy the solar panels to have them installed, Cuvakovic said. Instead, homeowners can just agree to buy the power that the panels generate at a flat rate.

“The savings aren’t huge, but there is savings,” he said. “The worst-case scenario is a bill swap.”

For those who aren’t interested in the full investment in solar panel installation but still want to improve home efficiency while reducing their carbon footprint, there is always Solar Reflections.

In addition to solar-powered attic fans, the company sells innovative lighting fixtures made by Solatube that use lenses and mirrors to direct sunlight from a roof to the interior of a house.

The system is also equipped with solar-powered rechargeable batteries that keep the lights on even after the sun goes down, according to Vargo.

Both the attic fans and the lighting fixtures are eligible for federal tax credits in excess of $200 and have prices that start at a little more than $700, he said.

“We get people who see what electrical costs are and they want to be a little more green friendly, if you will,” he said. “These are cost-effective ways for any homeowner to do it, and with the tax incentive, it’s a no-brainer.”

Daryl Nerl is a freelance writer.

Face coverings are strongly recommended for fans who are not fully vaccinated, unless actively eating or drinking, per CDC guidelines.

Only the following bags are allowed:

Brides/Grooms to be can register to win the Grand Prize Wedding Package, which includes a honeymoon vacation courtesy of Calabash Resort & Spa, Tuxedo Package from the Men’s Wearhouse, $250 Gift Certificate courtesy of Blue Knot Creative Studios, and a One-Year Membership to LA Fitness. Some limitations/restrictions may apply.

You will also receive a $2.00 discount code (via email) on your ticket purchases.